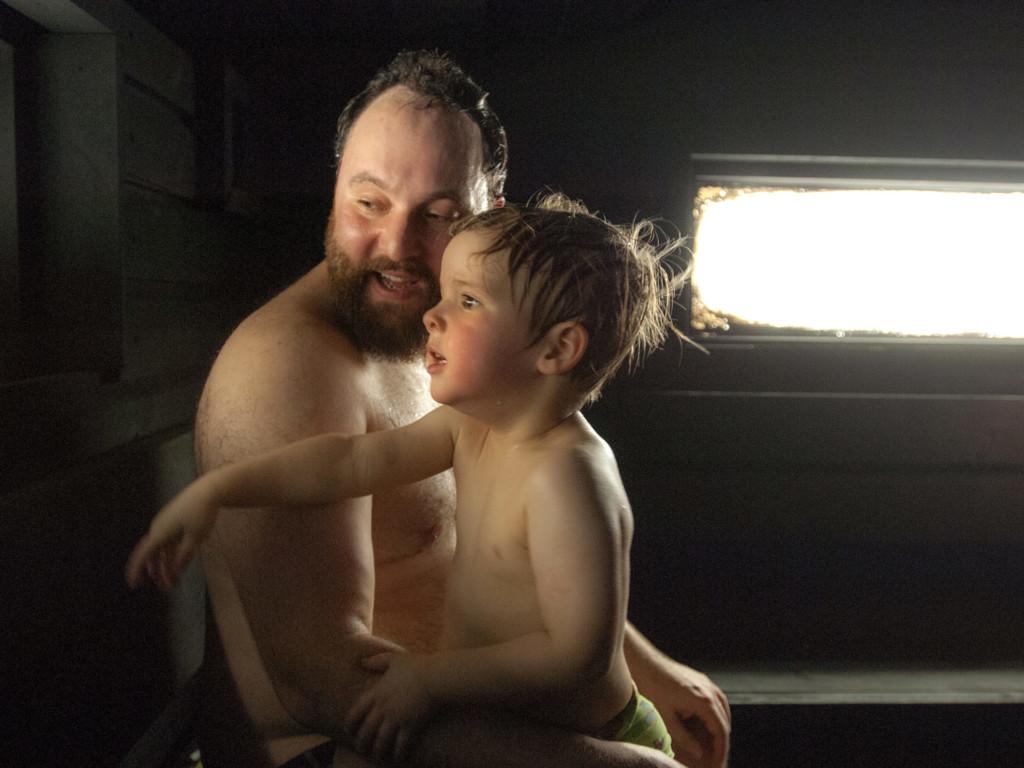 Home Sauna knowledge A child in the sauna

A child in the sauna

A child in the sauna

Professor Ilkka Välimäki gave a talk titled A Child in the Sauna at the International Sauna Congress in August 2006.

A healthy newborn has their first bath within the first hour of their life. Prior to this, the baby has spent several months in body-temperature water, ending in the strenuous undertaking that is childbirth. The first bath is a quick visit back in the wet element that flows on the baby’s skin and makes splashing noises, while the bather speaks words of adoration and holds the baby gently. A hundred years ago, 95% of all childbirths in Finland took place at home! Often, the mothers gave birth in the sauna, and a new baby had their first bath there as well.

A Finnish doctor felt completely astonished to hear a British children’s physician ask what age was safe for children to be introduced to the sauna. The question was posed at a conference in the 1980s, and naturally the British colleague was referring to a hot sauna with steam – the mythical löyly, which no other Englishman could pronounce apart from J. R. R. Tolkien. Luckily, we had already started to assess scientifically the effects that bathing in the sauna and being in a hot room have on children’s lives and bodies.

Even babies bathe in the sauna

Sauna bathing is part of Finnish family life and takes place at least once a week. Therefore, we assumed that families take their babies to the sauna with them from early on, and playing with water while sitting in a tub on a sauna bench is fun and harmless.

A survey we carried out in southwestern Finland showed that children are bathed in the sauna from the average age of 4.5 months onwards, with 12% having their first sauna bath at one month. Babies were taken into the hot room for less than five minutes at a time, but more than a quarter of 13-year-olds or older stayed for over 15 minutes. In addition to home, the surveyed children used saunas at spas and sports venues too. However, no statistically significant connection was found between sports and sauna bathing in this study that was conducted in the 1980s. Most of the children thought sauna bathing was pleasant, but approximately 19% suffered from mild discomfort, such as headaches, dizziness, feelings of being hot and heart palpitations. A total of 43% of those aged 13 or older said that after a sauna they tend to sleep better than normal, although some of the respondents stated the opposite. It would be interesting to repeat the study, because the habits of children and young people, as well as the way they spend their time, have changed considerably over the past few decades.

The Finnish sauna is a hot place, where the high air temperature (80–90 °C) and its rapid fluctuation during bathing set high requirements for the body’s temperature regulation system. While in the heat of a sauna, the body can only maintain a steady temperature and lower it by sweating. Children’s temperature regulation is in many ways more limited than that of adults: because of their overall size, babies and toddlers have a disadvantageously large skin area, causing them to get hotter than an adult at the same temperature. In addition to that, children have little fat tissue underneath their skin to insulate them from the heat, less of an ability to sweat and a high daily need for water intake. Because of their limited temperature regulation abilities, children’s core (rectal) temperature begins to rise as soon as they enter the sauna and continues to do so throughout the session. Therefore, a child cannot maintain a constant body temperature in the sauna.

The younger the child, the more limiting factors their circulatory system has. Everyone’s circulation becomes faster in the sauna. Children under the age of five will increase their heart’s pumping efficiency by increasing their pulse quite significantly, while with school-aged children the heartrate rises less noticeably. Arterial blood pressure does not change, because the vessels in the extremities become dilated as we warm up. When cooling down, young children’s blood pressure may become lower, and as their regulation system is slower to respond children may feel dizzy for a while. On the other hand, cooling down in cold water raises the blood pressure. Bathing in the sauna makes us breathe faster and pant, which increases pulmonary ventilation. This, too, may cause a small child to become dizzy. However, all these changes are mild, temporary and harmless in healthy children.

A hot environment activates the sympathetic regulation of the internal organs’ nervous system, and the hormonal regulation of the so-called stress hormones and the kidneys is activated the same way. The purpose of this is to maintain the body’s water content level and ensure a circulating blood volume and arterial blood pressure. Hormonal responses to sauna bathing can be identified in children. We noticed that a ten-minute heat stress caused 5–10-year-old children to lose 0.8% of their bodyweight due to sweating, but their blood plasma volume and sodium levels remained in balance. No response by the sympathetic nervous system to the sauna was detected. The heat stress responses identified included e.g. growth hormone secretion, but the changes were small, highly temporary and mostly similar to what has been observed in sauna studies involving adults. This showed that the children we studied were able to control their heat stress and emotional stress well.

Be aware of a child in the sauna

Being able to tolerate the heat stress caused by the sauna requires that our internal organs’ nervous system and hormone regulation are working flawlessly. However, this varies between individuals, and while one person adjusts to heat quickly, another may need more time. Bathing in the sauna will be a pleasant experience for a child, as long as the limitations discussed above are kept in mind. A sufficient fluid intake must be ensured while in the sauna. A child (and an adult) must be allowed to move between the hot room, the washing room and the cooling area according to their needs. The ten-minute heat exposure that we used as a standard in our study is atypical for real-world sauna bathing – too long for babies and perhaps too short for passionate bathers who are past their teenage years. Therefore, there is little point in timing yourself!

Even though an old Finnish proverb states that the sauna serves as a doctor for the poor, an acutely ill child who has a fever must not be taken to the sauna. The sauna will not cure a cold or an infection. Moreover, the accelerated breathing and circulation caused by the bathing is not as strenuous as going for a run, but if a child suffers from respiratory or heart failure, the parents should talk to a doctor about how to best enjoy the sauna and follow their recommendations. In addition to that, children require adults’ monitoring in the sauna – the younger the child the more vigilant the adults must be. Furthermore, the water used for creating steam (löyly) should be lukewarm to reduce the risk of burns.

We gave an elaborate answer to our British colleague’s questions about the sauna’s suitability. In truth, he might have been as interested in the topic as knowing the age at which a child may be allowed to listen to the Highland bagpipes’ delightful tones! We Finns firmly believe that our Finnish sauna is suitable for everyone, including our children. However, as paediatricians we know that it is not quite as simple as that. A small child cannot withstand a high heat for an extended period, nor can they communicate this fact. Young children, toddlers in particular, are also at risk of suffering burns. A Finnish family who are used to the sauna will probably be able to look after their children’s safety there, having inherited the sauna culture from their forebears. Do Finnish children become naturally adapted to the heat of the sauna, because they are exposed to it from a very young age? Are Finnish children able to bathe in the hot room better than foreign children? We do not know.

Few scientific studies have been conducted on sauna bathing amongst children, but extensive research should be carried out. And what better place to do it than in Finland?

The information on the page was compiled by Ilkka Välimäki and Eero Jokinen.